Register for eCourse (November Launch!)
Scarcity of literature with portrayals of Muslims is an oft-lamented issue in education circles. As a Muslim K-12 educator I have taken it upon myself to research and review books that feature Muslims in order to find ones that can be utilized in the classroom to engage Muslim students, foster respect and understanding for diversity, and offer counter narratives and differing perspectives to universal themes that often appear in literature, as well as upon history itself. I believe that reviewing these books and offering my perspective on them to other educators is important because the books out that portray Muslims, or people from the Middle East, Africa, and Asia by negative stereotypes are more numerous than ones that can be effective at fostering respect and cross-cultural understanding.

Below is a list of some of the books I would recommend to educators of Muslim students, or any educator who wishes to foster multi-cultural perspectives and respect, to use in their classroom. You may register for our training on April 28th where we will share study guides and lesson plan material that we have developed for some of these books, and we will show specific features in them that can be drawn upon to engage Muslim students as well as teach cross-cultural respect and understanding with lesson plan ideas and connections to reading standards. In the caption under the book cover pictures I have put the Accelerated Reader level of the book, and where that is not available I have put my own estimate of their general reading level and grade that might be used with.
There is a rich analysis to be done from this book in comparing and contrasting the virtues of Zahra (Cinderella) that are extolled, vs. the virtues of Cinderella in the traditional English tale, as well as others. Another example of a fine point to be made that richly illustrates cultural difference is that the story in this book is devoid of any "magic" or supernatural conjuring and figures, which would be deemed un-Islamic, in stark contrast to almost all other versions of the Cinderella story. ​This author has also written Snow White: An Islamic Tale, and a soon-to-be released Islamic version of Sleeping Beauty.

We have instructional and student materials available for a comprehensive cross-cultural study unit comparing and contrasting this story with a Greek Cinderella story and an English one.

​Deep in the Sahara 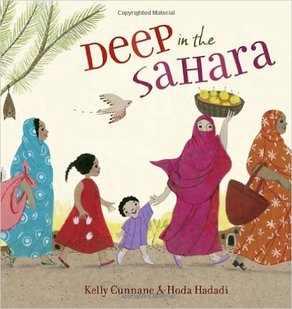 AR Level: 3.7
The dress of Muslim women is long mischaracterized in the Western World; if not as a sign of oppression than at least a source of bewilderment and strangeness to the Western observer. This book portrays the very real ambition of young Muslim girls to one day be old enough to where the hijab (or mulafa as the full length garment is referred to in Mauritania where the book is set). The book portrays the many associations of beauty, wisdom, maturity, and wisdom that Islamic dress represents to young Muslim girls, and would portray an alternative narrative to young non-Muslim students.

Interesting about this book is that it is illustrated by a Muslim lady, but the author is actually a non-Muslim who spent two years living in Mauritania and arrived to the country carrying the impressions of western stereotypes about Islamic dress, but came away from her time there with a fond respect for it that inspired her authorship of this book. Her story, told in the back, may spur as fruitful a discussion as the book itself about in your classroom about cross-cultural experience.

My Name is Bilal

A unique feature about this book that should not go unnoticed is that it is centered on male characters, which is harder to come across when it comes to children's books that feature Muslims. ​

​Night of the Moon

A glaring bias of K-12 education in the western world is its complete lack of acknowledgment of the contributions of Islam and Muslims to modern civilization and world history.  Thankfully they are now books for upper elementary school students and up that bring this history out.

The Genius of Islam - How Muslims Made the Modern World

The Road to Mecca